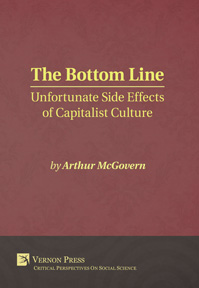 This monograph explores the role of culture in modern societies and the side effects that result when that role is distorted. The basic premise of this book is that many of the dominant cultural characteristics of modern life, like the ideologies and values associated with materialism and consumer capitalism, are cultural phenomena with influences that are in many ways problematic and in some ways downright detrimental to our sustained societal well-being.

I argue in this book that the globalized capitalist economic system has become increasingly efficient in terms of scale and scope, but has also become less humane in many regards; less connected to human needs and concerns. Of particular concern is the encroachment of economic interests into areas of human society that traditionally have been free from profit motives, or at least only minimally influenced by them; areas such as scientific research, the justice system, and even family relationships.

I suggest that there is a slow but steady intrusion into these areas of human life that were once considered off-limits to naked economic incentives and calculations. This intrusion puts the idea of America as a free and democratic society increasingly at risk when private economic stakeholders meddle in the political and cultural areas of society in ever more insidious ways to further their own enrichment at the expense of the public. Furthermore, the vast capitalist economic system is in many ways increasingly disconnected or disembedded from the contexts and regulations of traditional social relations as in the past.

Chapter 2 The Role of Culture
Culture
Frames and Ideas
The Strategic Use of Framing
Ideologies
Capitalism as Ideology
Individualism
Homo Economicus: The Ideal Man
Summary Thoughts