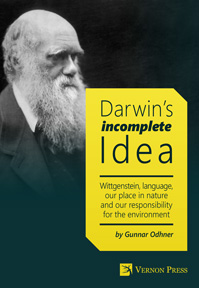 Wittgenstein, language, our place in nature and our responsibility for the environment.

Why is progress in environmental protection slow and faltering? Is it because we misunderstand our place in nature? This book argues that it is the normative implications of Darwinism and their powerful grip on collective social consciousness that are partly responsible for the tardiness.

For all its positive explanatory power and undoubted veracity, the normative implications of Darwinist thinking for our environmental predicament are stark: If we are children of Mother Nature equipped by her with a human nature, the responsibility for the deterioration of nature is partly Hers. This book takes a different standpoint. We are indeed children of Nature, but not primarily of the green nature or animal world but of the nature of language. We can understand how through the philosophy of Ludwig Wittgenstein, who states that “Language is a graft on instinctive behavior.” In our instinctive use of words we are parts of nature in a way resembling mice, frogs and giraffes. We are not as free as we think when we talk about our “free will”, because language uses us when we use it, hence our double roles as victims and instigators. The main thesis of this book is that rather than merely possessing language, we are language. If accepted, this realization may point the way to a more optimistic future for environmental protection and lay the foundations for a new analytical perspective on modern social behavior.

"Darwin's Incomplete Idea" was much discussed when first published in Sweden (Bokförlaget Anomali, 2013). The English edition exposes, for the first time, this important work to an international audience. It should be of interest to philosophers of language and social scientists concerned about the environment and our place in it.

1. Introduction
2. An increasing concern
3. The cornerstone of life
4. Homo Sapiens moves in
5. The magic of language
6. Language and society
7. A final survey
8. Back to nature
9. Elitism and ecofascism
10. Soulless robots
11. Political biology
12. The function of consciousness
13. The invisible ‘not’
14. The underestimated evolution
15. A true model

I was born in Sweden in 1942, grew up in a small town, went one year (1959-60) to high school in Glendale, Arizona as an exchange student and became a journalist in 1968, when my wife and I moved to Canada. I worked there as a journalist at the University of Alberta in Edmonton. Back in Sweden I took an MA in teaching at the University of Gothenburg. We had two girls born in 1970 and 1975 and settled in the town of Karlstad, Sweden. Following a three-decade long career in teaching, I developed an intense interest in philosophy. In 1996 my first book in that genre was published called "The Third Possibility" and later "Nothing is Hidden" (2011) and "Darwin’s incomplete Idea" (2013) – all in Swedish. I have also published four volumes of poetry, three novels and two autobiographies. I currently live in a small village in Varmland. 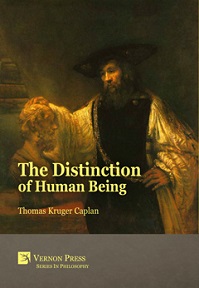 Wittgenstein, language, our place in nature and our responsibility for the environment.