Sandra Frimmel (*1977), PhD, studied art history and comparative literature in Berlin and Saint Petersburg. She obtained her doctorate with “Judging Art. Juridical Trials Against Art, Artists, and Curators in Russia After Perestroika” at the Humboldt University in Berlin. She has worked as a freelance curator and art critic, co-run a non-profit exhibition space in Berlin, and collaborated with the National Centre for Contemporary Arts (NCCA) in Moscow, Yekaterinburg, and Nizhny Novgorod. She was a curatorial assistant at the Kunstmuseum Liechtenstein, Vaduz, from 2008–2010. Between 2011 and 2019, she worked as an academic researcher on two major projects: the Swiss National Science Foundation survey of “Literature and Art on Trial” (2011–2016) and “Performance Art in Eastern Europe (1950–1990): History and Theory” (2016–2019) at the Department of Slavic Studies of the University of Zurich. She is currently the academic coordinator of the Centre of Arts and Cultural Theory (ZKK) at the University of Zurich. Her research interests include Russian art of the 19th, 20th, and 21st centuries, as well as concepts of art, law, and justice, power, and society. 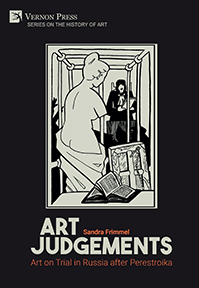